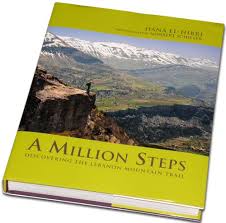 The New York Metropolitan Chapter of the Worldwide Alumni Association of the American University of Beirut (WAAAUB) hosted a presentation on the LMT and a book signing event with Ms. Hana El-Hibri on May 8, 2012 at its premises in New York City. Ms. El-Hibri is the author of the book “A Million Steps – Discovering the Lebanon Mountain Trail.” The event was attended by over 30 interested alumni and friends, including Ambassador Nawaf Salam, Lebanon’s Ambassador and Permanent Representative to the United Nations in New York, and his wife Sahar Baassiri Salam. AFLMT Board Members Joseph Karam, Sabra Purtill and David Startzell were also in attendance and helped respond to questions about the LMT.