A Trail of Promise 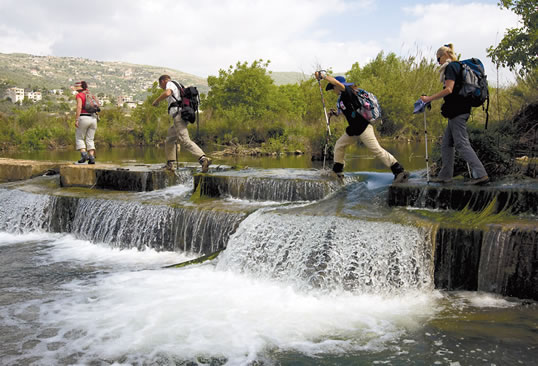 For centuries, Lebanon has lured travellers of all kinds, from literary icons to artists and photographers, and the country’s mountain ranges have proved especially appealing. The french poet Alphone de Lamartine, who toured the region between 1832 and 1833, wrote so eloquently about it that there is at least one valley and one spectacular cedar tree in the chouf mountains that bear his name. Lebanon also left a deep impression on 19th century David Roberts and William Henry Bartlett, as well as photographers Felix Bonfils and Frances Frith, all of whom produced volumes showcasing the land, its people and its antiquities.

As a photographer, I too find endless visual sources of inspiration in these majestic mountains. It could be an ancient cedar rising beneath a snow-capped summit or a shepherd leading his goats through mist along a rocky plateau, a canopy of cedars or a breathtaking view of the Mediterranean on the horizon.

Last April, I was invited to be part of a team of six hikers to make the inaugural walk-through of the Lebanon Mountain Trail (LMT), the first long-distance hiking trail in an Arab country. (“Long distance” is defined as more than 320 kilometers, or 200 miles.) Beginning in the north at Al Qbaiyat, the LMT winds 440 kilometers (272 mi) along the spine of the country, summiting peaks, traversing gorges and sweeping across plains to the southern town of Marjayoun.

The LMT is the brainchild of Joseph Karam, who says he was inspired by childhood walks with his father near his family’s ancestral mountain home in Baskinta. Later, when Karam moved to Boston to attend the Massachusetts Institute of Technology, he became intrigued by the 3500-kilometer (2200-mi) Appalachian Trail, which runs from Georgia to Maine.

It was in 2002, he says, that “it struck me that the mountains of Lebanon, with their amazing natural and cultural heritage, could be the home of a wonderful long-distance hiking trail.” Three years later, the United States Agency for International Development (USAID) awarded $3.3 million to Karam’s company, ECODIT—in spite of being, as he says, “somewhat skeptical … about our ability to deliver on our promises.”

But deliver they did, says Karam, “despite a very difficult situation” that included military action in the country in 2006. Community organizations, tour operators, municipalities and government ministries for tourism and the environment all contributed to the success, he says.

The LMT is divided into 26 segments. Each is a day’s hike, between 12 and 24 kilometers (7 1/2–15 mi) long, along combinations of shepherd paths, existing trails, dirt roads and irrigation canals. Though the trail’s net elevation change is only 180 meters (600′) from one end to the other, hikers climb a total of 22,000 meters (72,000′)—roughly 2 1/2 times the height of Mount Everest—and pass through 75 towns and villages if they traverse its full length. Because signage is still rudimentary in places, hikers are encouraged to use local guides, and family-run guest houses, hotels, monasteries and campgrounds offer accommodation at every stage. This, Karam explains, makes the LMT a cultural trail, too: It promotes local cuisines, handicrafts and festivals. The project’s hope is that, with economic benefits from LMT-related tourism, villagers will take the initiative to maintain the trail and care for natural surroundings and historical monuments.

Standing at the northern trailhead with my pack on my back, I felt at once burdened and exhilarated by the thought that, for the next 30 days, this path, and my companions, would be my life.

The northern segments pass first through the sparsely inhabited Akkar region and up through the protected forest of the Qammoua Plateau to the base of the tallest peak in Lebanon, 3083-meter (9900′) Qurnat al-Sawda. For five days we hiked through rugged, breathtaking scenery, and each evening we stayed with a Muslim family that received us warmly, often with solar-heated hot water for showers, good food and comfortable beds. The biggest obstacles were steep terrain covered in pine trees, dense brush and frigid, knee-deep rivers.

On the sixth day, we reached the Horsh Ehden Nature Reserve with its protected forest of Lebanon cedars (Cedrus libani) and Cilician fir (Apies cilica). The towns in this area, inhabited mostly by Maronite Christians, have a history of catering to travelers, pilgrims and sports enthusiasts. The areas around Ehden, Bcharre and Laqlouq are well known for downhill and cross-country skiing as well as hiking. After Ehden, we descended into the gorge of Wadi Qadisha (“Holy Valley”), where some of the earliest Christian monastic communities settled and which is today a World Heritage Site.

As we moved south, some municipalities hosted receptions for us, and we lodged in guest houses and small hotels as well as homes. Because part of our mission on this walk-through was to promote the trail itself, the LMT Association encouraged members of the media and the public to walk with us on weekends and holidays, and so we were joined by an ever-changing entourage of several dozen hiking companions from throughout Lebanon and around the world.

At the edge of one of Lebanon’s oldest cedar forests, near the resort town of Bcharre – the birthplace of poet and philosopher Kahlil Gibran- is the Ecoclub, a lodge run by Joe and Aline Rahme. It stands on property that Aline’s father – to the bewilderment of his neighbors- singlehandedly reforested over some 20 years. “We hope the LMT will promote much needed environmental awareness in this area.” says Joe.

April in Lebanon is notorious for storms that sweep in without warning from the Mediterranean. For a few days after a stop near the Phoenician temple of Afqa, we were pummeled by wind, rain, hail and snow—snow so heavy that we wondered whether winter had returned. Once the storm subsided, we continued to Karam’s hometown of Baskinta. There, we diverted for a day to explore the Baskinta Literary Trail, an offshoot of the LMT whose 24 kilometers (15 mi) feature 22 stops at landmarks relating to Lebanese poets and novelists, including Amin Maalouf, Mikhail Naimy and Abdallah Ghanem.

Farther on, after crossing the Beirut–Damascus highway, we entered the Chouf Mountains, dominated by the Druze, a sect whose roots are in Islam. Since the 19th century, Christians and Druze here have had a volatile relationship with much bloodshed, but recent reconciliations have brought quiet to the mountains. Ecologically, conservation of fauna and flora in the Chouf has had much success, especially of the Lebanon cedar, a focus since the 1950’s. Today, the Chouf Mountains are home to three forests with the highest concentration of Lebanon cedars in the world. We climbed through one of them, the Chouf Cedar Reserve, as we hiked from the village of Ain Zhalta to the summit of the mountain range, where we could look east across the Bekaa Valley to Mt. Hermon and west to the Mediterranean Sea.

After five days in the Chouf, we reached the town of Jezzine. Here, because of leftover landmines and unexploded ordnance, ECODIT routed the trail westward over the Mount Lebanon range and down into the Bekaa Valley before turning it south again.

Walking across the valley, we found ourselves waist-deep in a vibrant patchwork of red and pink poppies, white and yellow daisies, pale violet cyclamens and other wildflowers. The fields led us to the town of Rachaiya at the base of Mount Hermon. Here, non-Lebanese hikers can obtain a military pass to continue into south Lebanon, where there have been restrictions on travel since 2000.

With passes in hand, we set out on our final two days of hiking. After we crossed the Hasbani River, a Lebanese army patrol briefly questioned us, then wished us well. Later, the commander of a French United Nations military contingent was interested in how he too might hike the LMT. Although both encounters were entirely cordial, they were reminders of southern Lebanon’s volatility.

Thirty days after our departure, we reached the trail’s end at Marjayoun, the southern provincial capital. Our invigorating feeling of accomplishment, shared by the entire team, was tempered only by regret at damage we had witnessed along the way—unregulated development, illegal quarries, garbage dumps and the skeletons of unfinished buildings marred the otherwise breathtaking countryside in some places.

John Kairouz, executive director of the LMT Association, summed up the trail’s role as a conservation catalyst. “The LMT is more than just a trail,” he says. “It is more than a sustainable development project, more than a tourist destination or an ecotourism project. It is a trail of promise: a promise that through dedication and love, great strides in the development and protection of the treasures of Lebanon can be accomplished. This project defines a new era in the livelihood of these mountain communities.”

In the months since our inaugural walk-through, the LMT Association has counted some 15,000 visitor-days along the trail, and more than a dozen operators now offer hiking and guide services. The old cliché that, in Lebanon, you can ski a snowy slope in the morning and swim in the Mediterranean in the afternoon may still be true, but now, you can do both those things after walking its beautiful mountains for a month.

Norbert Schiller ([email protected]) has worked for 25 years as a photographer in the Middle East and Africa for agencies and publications including the AP, AFP, EPA, Getty, Der Spiegel and the New York Times.

This article appeared on pages 33-39 of the November/December 2009 print edition of Saudi Aramco World. 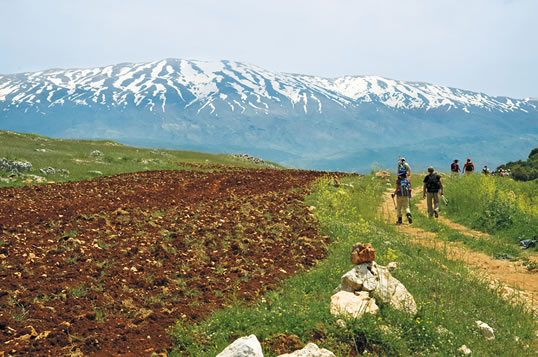 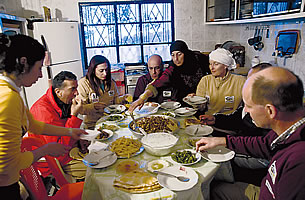 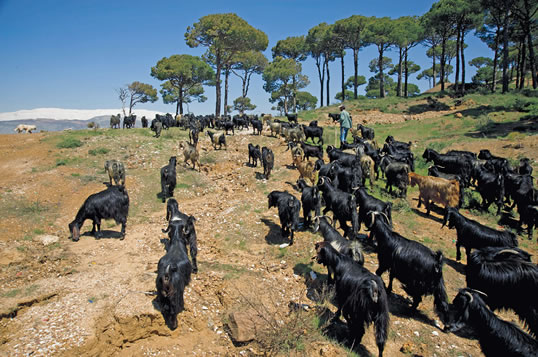 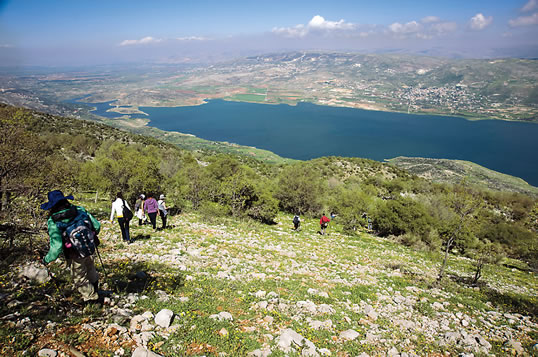