Tenth Anniversary Reflections on the Birth of the LMT 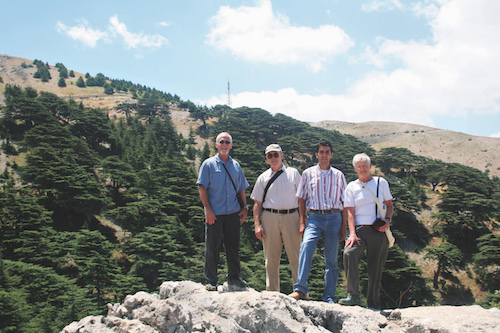 It was a pleasantly warm, partly cloudy day as Gilbert Moukheiber and I pulled off the road at a wayside to examine more closely the outskirts of the village of Baskinta, bordering the prospective route of the Lebanon Mountain Trail.

Gilbert expressed concern, and I agreed that, without some form of governmental designation, the LMT route, even once established, easily could be encroached upon or possibly obliterated by rapid and/or unregulated development. Our task that day was to explore by road the approximate route that the trail might take between the towns of Faqra and Falougha. Meanwhile, my colleagues, Dave Field and Marianne Skeen, both longtime volunteer leaders in the Appalachian Trail Conservancy and in their local trail clubs in Maine and Georgia respectively, were traveling with other LMT field coordinators to other sections of the proposed trail. Dave would travel the section between Maasser Al Shouf and Niha, while Marianne would travel the section between Ehden and Hassroun. The date was Wednesday, July 12, 2006, day five of our visit to Lebanon.

We climbed back into the car and began discussing the possibilities for a lunch stop, perhaps in the next village along the prospective route. Then, Gilbert received a call on his mobile phone. While the conversation was in Arabic, I could tell from the expression on Gilbert’s face that something was amiss. When the conversation ended, Gilbert said we would have to return to Beirut immediately, preferably by less-traveled roads. He explained that armed members of Hezbollah had captured and taken hostage two Israeli solders, killing a third Israeli soldier in the process, and that it was feared that the Israeli government would respond with force. The Lebanese Council of Ministers was assembling for an emergency meeting.

For much of the return journey, we sat in relative silence, each contemplating what a military response might mean for Beirut, for Lebanon, and for the future of the LMT project. We arrived at the Cavalier Hotel on Hamra Street, our temporary domicile during our one-week mission to Lebanon. A few hours later, Dave and Marianne returned from their field trips, and all three of us were told to remain in the hotel or not venture far from it, until we received further word from U.S. state department representatives. Nonetheless, the three of us did travel that evening a short distance with a number of members of the LMT project team to explore a portion of the Armenian district where we enjoyed a protracted and sumptuous dinner.

The next day, Israeli rockets descended on Beirut, striking the airport and a main bridge along the Beirut-Damascus highway among other targets. According to our mission schedule, we should have traveled south that day, toward Rachaya and Mount Hermon, after obtaining permission earlier in the week from Lebanese military officials due to the ever-present tensions near the border and the existence of land mines in certain areas. For obvious reasons, that trip was canceled. But, the following day, we kept our scheduled meeting at the Ministry of Tourism, where we visited with the Director General, Ms. Nada Sardouq, a delightful woman who presented each of us with a framed reproduction of a Phoenician raised relief of Cadmus, “The First Teacher,” which, 10 years later, still resides in a prominent location on a wall in my home in West Virginia. Ms. Sardouq explained with enthusiasm and pride that, after the devastating bombing that less than two years earlier had killed Prime Minister Hariri and others, the Lebanese economy was beginning to show signs of recovery and that tourism was once again on the rise. Then, as if a dark veil had descended and with moistening eyes, she expressed uncertainty about the effects the imminent conflict might have on the future of Lebanon, its economy, and the embryonic resurgence of its tourism industry.

With one exception, Dave, Marianne, and I would remain ensconced at our hotel or confined to a roughly four-block radius for the next three days in Hamra, a part of the city that was rather like a high-rise canyon. While the tall buildings shielded from view the effects of the repeated rocket attacks on various parts of the city, the sounds of the blasts were disarmingly audible. Each day, more and more local businesses would shutter their doors and the once-vibrant district became a virtual ghost town.

Nevertheless, on Sunday afternoon, July 14, the three of us had the opportunity to experience one last time the hospitality and generosity of the Lebanese people. We traveled to Duwair, Abadieh, in the foothills outside Beirut, to the summer home of Faisal Abu-Izzeddin, our gracious host in Lebanon and ECODIT’s Chief of Party for the LMT Project (see box). I would later describe that little piece of Eden as “a beautiful home fashioned from cut stone, with fruit, vegetable, and flower gardens all around and wonderful views of the mountains, deep river-cut valleys, and the shimmering Mediterranean in the distance.” There we enjoyed an extended meal with Faisal and his parents. While we had hoped to be joined by members of the LMT team, only a few were able to make it there; the others were trapped in Beirut or in their family villages as repeated missile attacks wreaked havoc on the country’s transportation (and other) infrastructure. Even from our temporary foothills oasis, we were acutely aware of the devastation as we watched black smoke rising from the still-smoldering fuel depots at the airport and heard the hum of Israeli surveillance drones and fighter jets overhead.

The next morning, we received word that we might have an opportunity to leave the country, departing from the U.S. embassy compound. We were told to quickly assemble our gear, that we would be limited to one suitcase each, and that we should be ready to depart on short notice. Our initial destination likely would be Cyprus. We quickly walked to the closest travel agency and exchanged our return-flight tickets for one-way tickets from Cyprus to any destination in Europe. No sooner had we returned to the hotel than our ride appeared and quickly shuttled us to the embassy compound, where we remained with 30 other visitors for several hours until a Marine helicopter gunship arrived and we were hustled aboard by its youthful crew. About an hour later, we arrived in Cyprus. Early the next day, I was the first of our small group to secure a flight to London and then on to the U.S. Dave and Marianne would follow later, by way of other airports in Europe.

During the weekend, while we were mostly confined to our hotel, we prepared the preliminary report to ECODIT of the findings and recommendations of the “ATC Resource Group” based on our initial five days of activities in Lebanon. Those activities had included an information exchange with the LMT team —a bright and energetic group of a dozen or more individuals, mostly young, with specializations in natural and cultural resource management, cartography, tourism, and other disciplines as well as a number of field coordinators with first-hand knowledge of the geography and the villages in the four regions along the proposed route of the trail. Later, we participated in a community-engagement workshop in Maasser Al Shouf (Auberge-St. Michel) and a community “validation hike” along a six-mile segment of trail near Falougha. We visited the magnificent Al-Shouf Nature Reserve and its ancient stands of cedars and met with an attorney to discuss the potential development of legal instruments to establish a Lebanon Mountain Trail Association. Finally, we reviewed and commented on a variety of critical success factors developed by the LMT team of ECODIT and its project partners to gauge the progress of the trail project.

The introductory conclusion of our report is perhaps worth sharing even now: “Despite many challenges, our overarching impression is that the LMT project holds great potential for stimulating tourism and associated economic benefits from both Lebanese and international visitors; for providing high quality outdoor recreation and resource-based learning experiences; for promoting conservation of sensitive natural and cultural resources —many of which possess national and even global significance; and for encouraging inter-governmental cooperation among the principal ministries of the Lebanese national government and local governments and especially among the many districts, municipalities, and villages along the proposed LMT route as well as other communities bordering key access routes to major trailheads or other entry points to the LMT.” That conclusion proved to be more prophetic than we could have imagined.

The war that began during our travels in Lebanon would continue raging for another three weeks until an U.N.-brokered ceasefire finally silenced the missiles, rockets, and cluster bombs.  Ultimately, more than 1,000 people died and more than 4,000 people were injured, and, by some estimates, nearly one-fifth of the population of Lebanon was displaced from its homes and villages. The national economy and even the political fabric of the country were altered and yet, in spite of the chaos and devastation of those days, the vision of a Lebanon Mountain Trail somehow endured. Within a brief two to three years, the trail emerged, as if from the ashes, to become an internationally recognized long-distance trail, a source of national pride, and a tribute to the endurance and indefatigable optimism of a proud and diverse people.

David Startzell worked in senior-management positions for the Appalachian Trail Conservancy in the United States for 34 years, including 25 years as its executive director/CEO. Now retired, he currently serves as an officer on the board of directors of the American Friends of the Lebanon Mountain Trail. In his spare time, he enjoys long-distance hiking and, with his wife Judy, a certified yoga instructor and former newspaper and magazine editor, a regular yoga practice.