USAID Celebrates its 50th Anniversary with a Rural Tourism Day 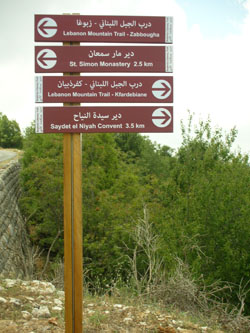 In April 2012, U.S. Agency for International Development (USAID) Assistant Administrator for the Middle East Mara Rudman concluded her visit to Lebanon by participating in Rural Tourism Day in Baskinta on April 24. The event was held to commemorate USAID’s 50th anniversary and to celebrate development achievements in Lebanon. Ms. Rudman first delivered remarks at the Abdallah Ghanem Cultural Center and spoke of the record of cooperation between the U.S. and Lebanon in the area of rural tourism, as well as the LMT and its successes to date. In 2008, the LMT provided $4.2 million to the rural economy and is projected to reach $22million by 2014. This translates to more jobs, opportunities for youth to stay in their communities, and the long-term preservation of Lebanon’s natural beauty and resources. Baskinta Mayor Tanios Ghanem and representatives of the Abdallah Ghanem Foundation and the Ministry of Tourism also spoke at the event.Ms. Rudman then participated in the Rural Tourism Day fair that featured over 20vendors that promote rural tourism and support economic growth in rural communities. Vendors included “Beyond Beirut,” an NGO that promotes rural tourism and empowers communities with the tools they need to actively develop their local assets and also publishes Lebanon Traveler magazine. Local agricultural producers and processors as well as tourism and hospitality business also participated. While in Baskinta, Ms. Rudman also paid tribute to acclaimed Lebanese writer and poet Mikhail Naimy by visiting the memorial garden where he’s buried in Shakhroub, one of 22 literary landmarks on theBaskinta Literary Trail (BLT), also part of the LMT. (See Media Coverage section below for a related Al Hurra report on the LMT and the BLT). The LMTAhas been has been clearing and blazing sections of the LMT as part of its ongoing trail maintenance efforts. To date, section 17 and parts of sections 6 and 16 have been cleared and blazed.